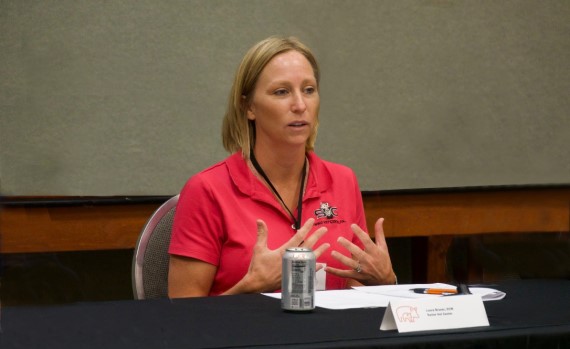 Clinical disease due to porcine circovirus type 2 (PCV2) has been dramatically reduced thanks to vaccination, but concern remains about the persistence of PCV2 subclinical infection, even in vaccinates, and the virus’s propensity for change.

Furthermore, PCV3, a newly identified porcine circovirus that is genetically different from PCV2, is believed to be widespread in US herds and, so far, there’s no consistent evidence it causes disease.

Those were among the observations shared by SVC’s Laura Bruner, DVM, and academicians, scientists diagnosticians at “The Changing Face of PCV,” a roundtable held at the 2018 Leman Swine Conference.

The panel agreed that new genotypes of PCV2 are expected to emerge, although currently the predominant genotype circulating in US herds is PCV2d, according to Darin Madson, DVM, PhD, Iowa State University, a leading PCV expert who tracks the virus’s evolution.

He explained that PCV2 replicates at a high rate for a DNA virus. PCV2a and PCV2b were major players in the US from 2005 until 2012, when a genetic shift to PCV2d occurred. Additional genotypes that have been identified include PCV2e and PCV2f.

“It’s pretty unique to have a DNA virus mutate to the level [PCV2] has,” Madson said.

Albert Rovira, DVM, PhD, a diagnostician at the University of Minnesota, said sequencing of PCV2 field strains in 2017 showed that more than 50% were PCV2d.

“What’s interesting is that about 35% were PCV2a, about 12% were PCV2b and about 3% were PCV2e. So, PCV2d is definitely the main genotype, but PCV2a and PCV2b are not gone; they are still there,” he said.

The pattern in Europe has been similar, said Joaquim Segalés, DVM, PhD, of the Universitat Autònoma de Barcelona, another PCV authority. There were big outbreaks of systemic disease that occurred with the shift in genotype from PCV2a to PCV2b around 2000 to 2001, and now it appears PCV2d is increasing in prevalence.

Despite the shift in the predominant genotype of PCV2, panel moderator and practitioner Clayton Johnson, DVM, Carthage Veterinary Service, said, “Vaccination against PCV2 has been a success story in the industry…but we always ask if things could be better. Subclinical PCV2 disease remains a problem.”

SVC’s Laura Bruner, DVM, of the Swine Vet Center (SVC), said, “Subclinical PCV2 disease is super hard to find…I wasn’t worried about it before, but I think that’s probably what concerns me the most now…PCV2 wasn’t a big deal at first, then all of a sudden it became a really big deal. I don’t want to [go] back there,” she said.

Similar concern was voiced by Vitelio Utrera, DVM, PhD, a swine respiratory disease specialist with Zoetis, who said subclinical infection may be underestimated. “If the vaccines are working well, that brings the genetic shift into question. If there’s no immune pressure, why is the virus genetically changing?”

He referred to a study in herds with no clinical PCV2 disease that had improved average daily gain and growth performance after PCV2 vaccination. “So, in that way, they showed there was a subclinical infection associated with PCV2.”

However, Meggan Bandrick, DVM, PhD, a Zoetis scientist, said cross-protection is not complete. If heterologous vaccine strains are used — vaccines that aren’t matched to field strains — “we see [more] viremia and fecal shedding” compared to the use of vaccines that match field strains.

“So, you may still see protection against disease where the vaccine and challenge strain are mismatched, but that subclinical disease is still there.”

As genetic shifts occur, there’s a growing gap between vaccine and field strains, Bandrick maintained. That gap, substantiated with results from epitope analysis, is what prompted Zoetis to develop the first PCV2 vaccine with two genotypes — PCV2a as well as PCV2b. The vaccine is also effective against PCV2d and is expected to provide broader coverage against current and emerging genotypes of PCV2.

Several panelists said an important key to successful PCV2 control is proper use of available vaccines.

Segalés acknowledged that vaccination isn’t perfect, “especially if we use a single shot. Try two doses and you will improve results from vaccination, for sure.”

Similar experience was cited by Rovira, who said he hadn’t dealt with any cases he thought were real vaccine failures.

“We know that in most cases the vaccines work really well, if we use them well,” but he cautioned about cutting corners at times when the swine industry isn’t as profitable. “When we tried to cut corners on PCV2 vaccination, we started seeing it again.”

SVC’s Bruner said, “Everything starts with the sow herd. If you have a really good PCV2 vaccination program on your sow farm, those instances of vaccine failure or vaccination failure are less just because you started with a lower amount of PCV2 on the sow farm being transmitted to piglets.”

Panelists emphasized that PCV3 and PCV2 are different viruses. PCV3 appears to be widespread but went largely undetected until recently, they said.

Rovira said there are reports of PCV3 as far back as 1996 in Spain, and in Sweden, PCV3 was found later in a sample collected in 1993. “I think we would all agree this is a virus that has been among us for a long time.”

Jianfa Bai, PhD, a molecular diagnostician at Kansas State University, said in his lab, the PCV3-positive rate has gone up, indicating a close eye should be kept on prevalence changes in the field.

Nevertheless, Bai, as well as Segalés, Madson and Utrera, said that so far, PCV3 is merely a finding and proof is lacking that this virus causes disease. Johnson added, “…it’s the classic question of infection versus disease. I have absolutely found infection. I have not yet found anything I would characterize as a disease…”

Bruner, however, expressed concern about PCV3 and said she’s finding a lot in all types of tissue and in processing fluids. She described a case she had involving a sow herd with a high mummy rate. Lab testing showed high levels of PCV3 in mummy tissue as well as epicarditis and myocarditis. Other pathogens were not found.

Madson said PCV3 is often seen at the Iowa State Diagnostic Lab, and although it’s been found in higher quantities in reproductive cases testing negative for other pathogens, the causative pathogen may have cleared by the time samples were submitted.

Rovira said his lab is likewise finding PCV3 to be “very common,” now in over 34% of samples that come through. There have been a few myocarditis cases associated with PCV3 from different farms and different clients. “That builds confidence for us that the first reported case was not just a fluke.”

In some of the cases, there was an influx of gilts. It could be that PCV3 is subclinical and does nothing, but if an imbalance of immunity occurs in the herd, problems may occur and then resolve. His overall impression about PCV3 is that it can be relevant in a very small percentage of cases.

PCV3 can also occur along with other pathogens, such as PCV2, reproductive and respiratory disease virus and parvovirus, panelists reported.

Because PCV3 and PCV2 are less than 40% genetically similar, Bandrick and others said PCV2 vaccines would not cross-protect against PCV3. That brought up the question of whether a vaccine for PCV3 is needed.

Bandrick said at this time, a PCV3 vaccine would not be of great benefit to the industry, but she stressed the situation needs to be carefully monitored. So far, it’s not been possible to culture PCV3 in the lab, but there are other ways to develop a vaccine if one is needed.

Bruner said if a PCV3 vaccine were available, she’d probably try it out when there’s a herd with a high mummy rate and the only pathogen that can be found is PCV3. Similarly, Rovira said he believes other practitioners would try a PCV3 vaccine for cases of abortions or mummies if they thought PCV3 was involved.

Despite all the questions that remain about the significance of PCV3, Segales said, “Certainly, PCV3 can be added into the pile of pathogens you are looking for…I would say let’s try to isolate it so we can perform experimental infections.”

Utrera agreed and said for now, “…we need to have the virus, we need to reproduce the [signs] and lesions, and we need to identify any associated cofactors and then record them.”

Editor’s note: For a copy of the roundtable proceedings booklet, click here. 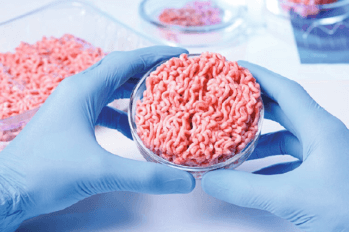 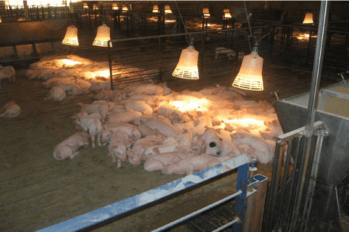