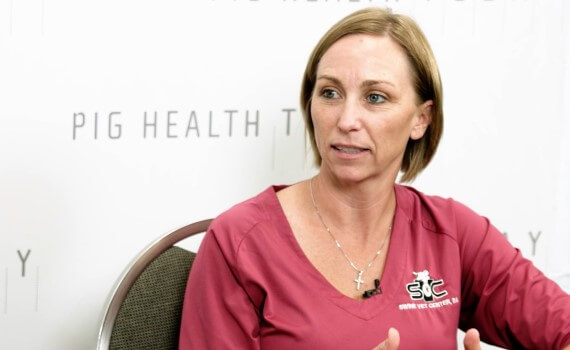 Sow farms that have eradicated Mycoplasma hyopneumoniae (M. hyo) must continue surveillance to keep the pathogen out or the results will be devastating, according to Laura Bruner, DVM, Swine Vet Center (SVC), St. Peter, MN.

“The most common entry is usually gilt introduction,” she said. “Mycoplasma can enter through the air but is less frequent.”

Historically, serology tests were used to see if the incoming gilts were negative to M. hyo. But those tests are six weeks behind the infection, Bruner claims.

“In serology, we’re really looking at antibodies,” she explained. “Mycoplasma is a little bit unique in that we don’t start seeing antibodies in the serum until somewhere 4 to 6 weeks post-infection so I’m going to miss a really acute infection or a recent infection.”

Now she uses laryngeal swabs and M. hyo PCR (polymerase chain reaction) test to look for the actual bacteria in gilts. Bruner’s SVC colleague Alyssa Betlach, DVM, made this determination after conducting research to find the most accurate test and protocol for finding M. hyo in gilts.

“The laryngeal swabs tested for mycoplasma with PCR means we’re actually looking for the bacteria versus the response (to the bacteria) like serology does,” Bruner said.

The laryngeal swab requires a speculum to open the mouth and take a saliva sample from the larynx where saliva builds up. Bruner uses a regular spoon with an extension to collect the sample.

“We’re going closer to the respiratory tract and pulling out saliva that we can test for the bacteria,” Bruner said. “Ropes have been used in the past for mycoplasma, but the sensitivity is not very good… It does not pick up infections as well as laryngeal swabs.”

When a group of gilts comes into a facility, Bruner tests 30 animals and pools the tests into groups of three for a total of ten PCR tests.

Since implementing the test a year ago, she’s encountered a few suspects, but none positive to M. hyo. When she has a suspect test result, she goes back a week later and takes 60 samples, either laryngeal swabs or deep tracheal samples.

Testing for mycoplasma is not limited to gilts. “If we hear coughing on the sow farm, that will prompt us to test for mycoplasma, using the same method of the laryngeal swabs,” Bruner said. The same goes for early- or mid-finishing pigs. If a test is positive, she will go back to the sow farm and do more testing.

Bruner and her colleagues have conducted mycoplasma eradication on nearly 200,000 sows with an 80% success rate. These new surveillance protocols will help keep the successful herds negative.

A 2,200-sow, farrow-to-wean farm still under construction recently opened its doors for the public to see the latest technology in hog building design. More than 500 people registered to walk through the farm’s completed sow gestation and gilt development barns along with the unfinished farrowing barn.

The new Coleman Chops sow farm, being built by Brandon Romsdahl, is located near St. James, Minnesota. Swine Vet Center (SVC) helped owner Brent Coleman develop plans to better control disease and maintain a high-health status in the new facility. Brent, his father Dennis and family have farmed and raised hogs in this area for years. Brent will finish out all the hogs produced by the sow farm.

The new farm is equipped with several new features to help reduce disease entry into the farm, according to SVC’s Brad Leuwerke, DVM.

All air coming into the farm will be pulled through air fliters before entering the barn.

“We know that using filters helps reduce the amount of virus that comes into a farm,” Leuwerke said. Many sow farms now use filters to help prevent the entry of diseases like porcine reproductive and respiratory syndrome (PRRS) into their herd.

The sow farm also has an outside concrete wall installed around the entire facility to reduce air leakage.

“A typical sow farm with wood and steel inherently has air leaks, that take a lot of time to continue to seal,” Leuwerke added. “The cement makes a tighter building and forces the air to go through the filters.”

The concrete walls are made with a plastic-forming system by Nuform. The plastic forms are snapped into place for the wall, rebar installed and cement poured into the forms. When hardened, the concrete wall has a smooth, white plastic exterior. The Nuform also has foam built in for better insulation and energy savings.

When completed, the sow farm office will include a heated disinfection room to make sure all supplies brought into the farm will be pathogen-free. The room warms up to at least 90 degrees for a period of time to inactivate all pathogens. Everything going into the farm, will go through this room.

Other standard biosecurity measures are in place for workers and visitors entering the facility. Some of these measures include a pressurized entryway, an ultraviolet box to disinfect items necessary in the farm like employee lunches and electronics, and shower in with clothing changes.

In addition, pigs will exit the facilty through a pressurized loadout room that prevents the backdraft of unfiltered air when doors are open and trailers are being loaded.

The sow farm will develop its own gilts to reduce the risk of disease brought in by replacement gilts from another site.

“Brent and I discussed internal multiplication a lot,” Leuwerke said. “He had prior experience with this and we feel it’s a good way to reduce disease risk.

“A segment of his herd will be able to make the replacement animals. Those sows will farrow with other sows and their offspring we chose to keep will walk down the hallway and go into the gilt developer unit. They never leave the farm,” he explained.

If replacement gilts ever do need to be brought in, they will come in at 3 weeks of age and will go into a quarantine room. The animals will be tested and when cleared, will move into the main farm.

Gestating sows in the new farm start out in gestation stalls and move to small pens after reaching 50 days of pregnancy. Twelve similar sows will be kept in each pen together as a group for the duration of gestation

“We tend to find pens mixed with like size and age sows don’t fight as much,” Leuwerke said. “It doesn’t eliminate it, but it reduces it.”

Twelve stanchions in each pen for feeding and a simultaneous feed drop also help reduce aggression.

The first gilts were moved into the new facility shortly after the open house. The rest of the facility is expected to be completed in early 2020, in time for the first farrowings.

“Our hope is they can go for a long time without experiencing a major health challenge and be able to send pigs to the nursery that do well,” Leuwerke concluded.

Pigs are born with very limited iron reserves (50 milligrams) and sow’s milk is a poor source of iron, supplying about 1 milligram (mg) of iron per pig per day. For optimal growth, pigs utilize an estimated 7-16 mg of iron per day, depending on growth rate. As herds continue to become more productive with increasing litter size and piglet growth rate, it’s important to evaluate iron supplementation practices to ensure that you avoid piglet anemia in your herd.

Pigs that have inadequate iron are considered anemic. Visually, pigs with moderate to severe anemia display several signs including: a roughened hair coat, wrinkled skin, lethargy, and most notably pallor of skin and extremities. Labored breathing and mortality can be observed in severe cases. Subclinical anemia, which may not lead to such overt signs, is often caused by inadequate supplementation or increased utilization by the pig, and has the potential to reduce growth and increase disease susceptibility both pre and post-weaning.
A typical protocol would consist of a 200 mg dose of iron dextran delivered through an intramuscular injection between day 1 and 3 following birth. However, recent research suggests that additional iron may be needed to avoid anemia and maximize post-weaning performance.

If anemia is a concern within your herd, it’s important that hemoglobin testing be part of the full diagnostic work-up. Determining hemoglobin concentration often has required that samples be sent to a diagnostic laboratory to be evaluated. However, a handheld device used in the human medical field has recently become available to use. The HemoCue Hb 201+ (HemoCue AB, Angelholm, Sweden) system allows for quick and accurate hemoglobin analysis to be completed on-farm.

While providing supplemental iron to suckling piglets has been a routine practice for decades, it would be beneficial to review your current program and fine-tune protocols if necessary. Contact your SVC vet for more information.

Swine Vet Center, a clinic with 15 veterinarians focused on pig health, has launched a new website to keep its customers and the pork industry posted on its latest services, ideas and initiatives. “For us, nothing will ever replace face-to-face contact with our customers, but we wanted to expand our online presence and help the pork industry develop a better understanding of who we are and our approach to swine medicine,” said Laura Bruner, DVM, a veterinarian at SVC who was actively involved with the website’s development.

In addition to new veterinarian profiles and an overview of SVC’s services, the site features sections called SVC News, which includes articles written by or involving the clinic’s veterinarians. The new website also features PHT+, a news feed curated by the editors of Pig Health Today.

Swine Vet Center also announced that it was developing a new e-newsletter to keep the pork industry updated on the latest trends and ideas in pig health. To subscribe, go to https://swinevetcenter.com/newsletter/

Swine Vet Center has come a long way since 1990 — when three veterinarians hung out a shingle in St. Peter, Minnesota, to service the flourishing pork industry in the Midwest. The clinic’s customers have changed, too. Today the clinic serves producers in many states, ranging from major pork-production companies with 25,000 to 150,000+ sows to traditional family farms with 500 to 2,400 sows.