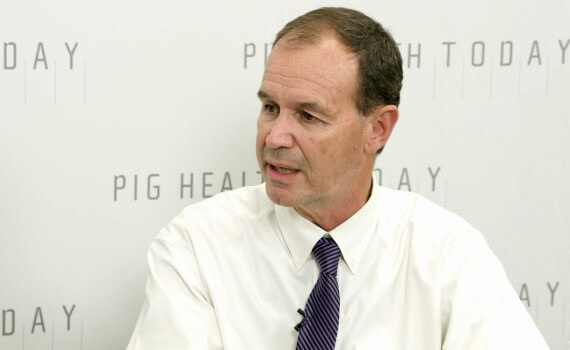 The Food and Drug Administration’s revised rules for antibiotic use in hogs, including the veterinary feed directive (VFD), has led to a reduction in and more strategic use of antibiotics in swine.

But getting to this point required trial and error to determine what was and wasn’t needed, according to Mike Eisenmenger, DVM, Swine Veterinary Center.

Eisenmenger and his clients decided to use the new VFD rules as an opportunity to figure out exactly what antibiotics are needed. They removed most antibiotics including those used in nursery feed, routine sow pulses and injectables at farrowing.

“What we found was both good and bad,” he admitted. “Some of those antibiotics were truly needed.”

One example is in the farrowing house where they stopped giving antibiotic injections during processing.

“Over the next 6 months to a year, we noticed in a lot of the systems that preweaning mortality was going up,” Eisenmenger said. “When we went back and explored the reasons, there were a lot of joint infections occurring around the time of those surgical procedures.

When the VFD was first announced, Eisenmenger admitted he was concerned. “Am I going to be a veterinarian that’s just signing a bunch of paperwork?” he asked.

“But this was good for us. It made us stop and reflect on all the programs that we’re doing and [understand] which ones were really needed.”

These decisions are made with clients during quarterly meetings where they review all feed-grade antibiotic programs and other antibiotic needs.

“We’ve learned that antibiotics are still extremely important to pig health,” Eisenmenger said. “Our job is to take what I would say is a precious resource…and do our best to use it most appropriately.”

Right now, he is not supportive of antibiotic-free hog production, especially with current disease challenges in the hog industry. “I’m hoping we are not forced to go to that direction,” he said.

“We want to preserve the right to use antibiotics, and if we do it in a responsible way, which I think we are under the VFD prescription process, it’s something that can continue in the future,” he added.

One of the things that’s consistent among all top farms is proper management of the gilt. High gilt production will improve overall farm farrowing rate, total born and weaned average. When gilts are managed correctly, they can achieve 92-94% farrowing rate, greater than 15 total born and greater than 14 born alive…and production will continue to increase throughout their lifetime. This has become common knowledge in the industry, yet many farms still fall short in realizing the full genetic potential of the gilt in this regard.

Shown is a graph looking at total born by parity. As you can see, if a female performs well as a gilt, she will continue to perform better throughout her life. Said another way however, a poor performing gilt will continue to do poorer for the rest of her parities. She doesn’t catch up.

So how do top farms “do gilts right”? It starts with the basics of breeding.

Here are the hallmarks of gilt breeding: 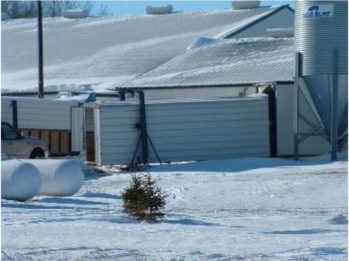 It’s getting cold outside and cold weather is the perfect environment for SIV, PED, TGE and PRRS viruses to thrive. Don’t let the chute and other outside equipment be the weak link in your biosecurity program. These items can be disinfected with a mixture of Intervention™ and propylene glycol. On the next page you will find a concentrate that can help you stick to your biosecurity program by keeping the chute from icing up when disinfecting during freezing temperatures.

With record fall moisture this year, the potential for mycotoxins is elevated. Mycotoxins are produced by funguses under specific conditions of oxygen, temperature, moisture, and carbohydrate (grains). Extreme weather is what typically produces mycotoxins. The unseasonably, wet fall and varying temperatures should cause a greater concern for mycotoxins this year. Uncovered storage is another factor that may raise the risks. An important thing to realize is whether or not mycotoxins were found in your state or area does not mean all crops are contaminated; however, it does call for increased awareness.

Four major mycotoxins and their effects in swine include:

There can be synergistic relationships between some mycotoxin groups. When certain mycotoxins are found together in a diet, these combinations can cause toxicity higher than the sum of the 2 parts. For example, the toxicity of a low to medium level of DON mycotoxin could be magnified if fumonisin is also present in the diet. While our understanding of mycotoxins has increased significantly over the years, the combination-effect of multiple mycotoxins is still widely unestablished given the difficulty in stimulating research to understand more.

If you are questioning whether or not you’re dealing with mycotoxins on your farm, immedicately collect a representative feed sample from where the issues are occurring. A gallon-sized Ziplock bag filled with feed should be collected and can be put in the freezer for storage if necessary until submission for testing. Mycotoxin testing is available from Iowa State University as well as North Dakota State University diagnostic labs.

Commercial mycotoxin binders are available that can be added to your rations to reduce the toxic effects. Contact your nutritionist or Swine Vet Center veterinarian for more information about these products.