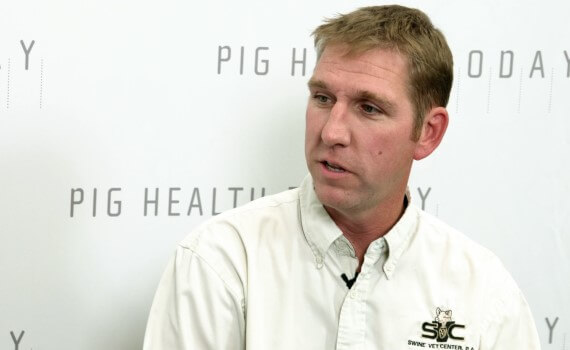 The wild run of porcine epidemic diarrhea (PED) striking the pork industry in 2013 has slowed substantially. But chronic versions of PED continue to plague some farms.

“I still get calls about farms that try to get rid of PED and they struggle,” reported Ross Kiehne, DVM, Swine Vet Center, St. Peter, Minnesota. “I’ve been asked to step in and see where [they] are going wrong in those cases.”

Chronic PED problems occur when a farm initially did a good job gathering feedback to expose piglets to the disease. As PED quieted down, less material was available to continue the program, and the farm stopped the practice. This allowed the disease to survive, according to Kiehne.

One solution is to focus on meticulous cleaning of farrowing rooms, allowing the facilities to be disinfected and completely dried over a period of a few days. This may require an earlier weaning age for one turn of farrowing, Kiehne says, but it may stop chronic PED.

Another option is to go back to a feedback program, which Kiehne has used in some cases.

“I’m utilizing that feedback just to try and make sure we’ve got every animal covered,” he said. “This is something you’ve got to work with your veterinarian on because some [people] think it would reinvigorate the disease.

“But I’ve found that is necessary when you’ve been fighting [PED] for too long and not getting rid of it,” he said.

Vaccines also are available to boost immunity to PED. Kiehne suggests working with a veterinarian to determine the best way to use one in your system.

Chronic PED isn’t as devastating as the acute cases, but it still hits the bottom line. For example, 1 day of scours in a baby pig sets it back 3 to 5 days, which is why Kiehne wants PED eliminated from herds.

Kiehne starts his PED-elimination efforts with an evaluation of management including gilt entry and pig movement. “If we’re moving a lot of pigs around and we’re not following a strict all-in, all-out [system], that can be part of the PED problem,” he said.

“I think we know way more about PED now than we did in 2013 and 2014,” he continued. “We can keep it out better now than we could then. We’ve been successful in getting rid of it in so many places.”

Kiehne also believes that someday, PED can be eliminated from the industry.

“But it’s going to be hard,” he added. “I think my outlook would be that we continue to move in that direction because we’re a progressive group of farmers who want to do better.”