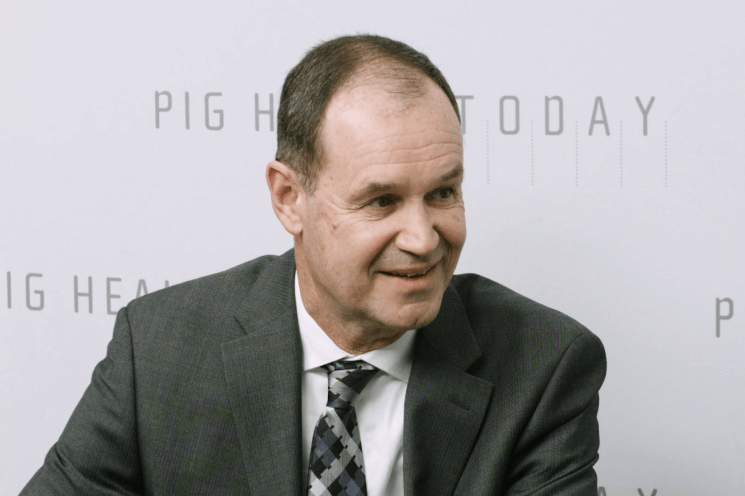 “We had to stabilize the health in the sow system first,” Eisenmenger said. “Companies invested millions into the sow farm…all to make a really healthy pig that we can flow downstream.

“But now, it becomes critical that we increase the biosecurity of the grow-finish system as we’ve made all those investments in the [sow] system,” he added.

A major biosecurity risk for grow-finish farms is the transport of hogs to market.

“We invest a ton of money and effort into getting transportation right when we haul gilts, move sows, haul weaned pigs and haul nursery pigs,” Eisenmenger said. “But when we get the finishing barn off to the market, that’s where we still have a long way to go.”

Increasing biosecurity for grow-finish is tough due to the sheer number of facilities. For example, one sow-farm system may have anywhere from 10 to 40 locations. “Now you branch off into the nursery/grow-finish world and you’ll have hundreds and hundreds of locations that may be scattered across multiple states,” Eisenmenger explained.

“Just the sheer diversity of geography and [being] able to keep your eyes focused on all areas at the same time is a big challenge.”

In reality, transporting hogs to market should pose no risk to the farm just like trucks used to transport sows and gilts, Eisenmenger said.

“I have complete confidence that we can take a truck that’s hauled infected pigs, bring it in and get it cleaned up, disinfected, baked and heated; and it’s pathogen-free,” he said. “Now suppose we could do that with all our market trucks.”

The trucker then drives to a truck-wash facility to drop off the trailer and drives the tractor through a car-wash-type facility. At that point, the trucker is ready to pick up another trailer that’s been flushed, power washed, disinfected and baked.

“We know from previous experience and testing hundreds of trucks that we can get them clean after they’ve hauled infected pigs,” Eisenmenger said. “We know how to do it and we know what to build. The last step is who’s going to build it…who’s going to run it, provide oversight and audit the facility?”

Two truck-wash strategies appear to be developing in the industry.

“One is going to be the pig farm or company owns it, runs it and controls it,” he said. “Or two, I think you’re going to leave it up to the individual private entrepreneurs who want to build it, and [pork] producers contract with them.”

He envisions a truck-wash facility with a pool of clean trailers ready for truckers to take back to a farm for another load to market.

Of course, there are issues to overcome like turn-around time for the trucker. Currently, trucks can leave a packing plant immediately after unloading and head home to get another load in a few minutes.

Another issue is most contract truckers own their tractor and trailer.

“This would be a completely new concept,” Eisenmenger said. “It’s like you don’t own the trailer. It’s just in this pool of trailers and they’re all the same. Drop off a dirty, pick up a clean and head back out. So that’s another step to clearly overcome.”

“I still believe that we underestimate the cost of poor biosecurity…on a regular, routine basis in the nursery/grow-finish system,” he said.

Eisenmenger considers grow-finish biosecurity a very important tool in the toolbox to keep “diseases that we currently have in this country out of our finishers. [Then] we’re going to be much healthier, happier and, obviously, use less antibiotics in treatments.” 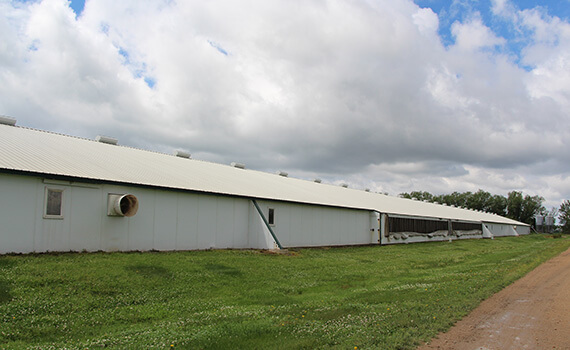 Although recent weather has been hot and at times dry, periods of wet, cooler weather provides a perfect environment for flies and mosquitos to live and breed around barns. An increase in mosquito populations bring with it an increased frequency of bites and the risk of carcass trim that can be costly. Flies are a nuisance and have the potential of spreading diseases. Several options are available for insect control in and around our swine barns. Before considering insecticides, work on managing the environmental factors that allow insect breeding. 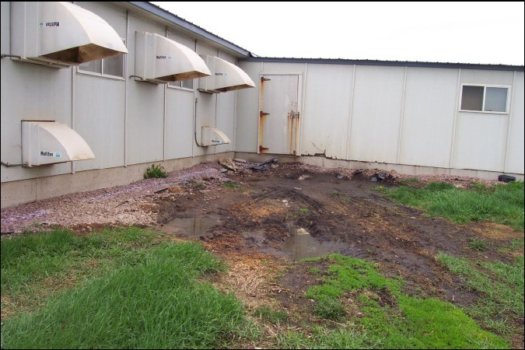 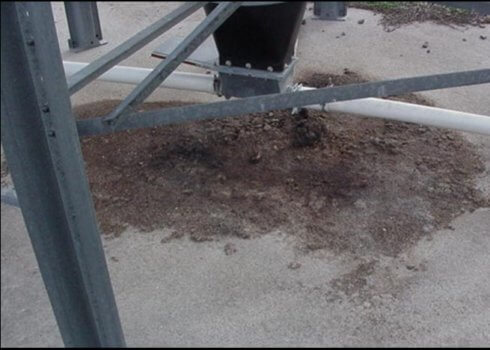 Insecticides are also an important part of a fly and mosquito control program. Several options are available. Consider the following:

Insect growth regulators (IGR) disrupt the molting process, which is essential for fly life. IGR’s are used to treat the pit, where the fly life cycle is most often taking place. 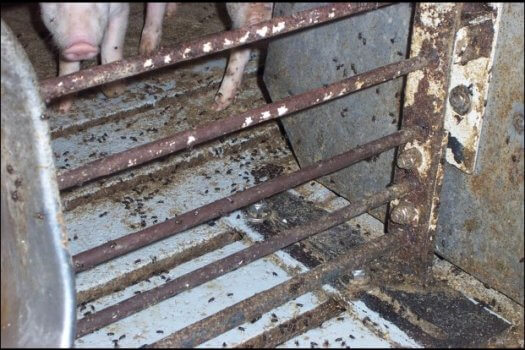 Optimate® CS as a residual spray on surfaces where adult flies rest.

Tempo SC to spray the perimeter of the building.

Microcare 3% CS—Apply to pigs and on barn surfaces as a light mist.

Tempo SC— spray outside the barn a couple weeks prior to topping if mosquitoes are an issue. Sites may need to be sprayed weekly until the site is closed out.

Microcare 3% CS— Apply to pigs and on barn surfaces as a light mist.

Supply entry into a farm has always presented a biosecurity risk. Over time, multiple methods to attempt full disinfection of these supplies have been used. Fogging supplies with a disinfectant is a common practice used by farms to decontaminate supplies¼ although it may not be as effective as we all perceive it to be. Recent work presented in the student session at the 2020 AASV meeting, reviewed the fogging of supplies and showed that this practice does not apply full coverage of disinfectant on the surfaces of supplies.

The manual application through a hand-sprayer was able to achieve a 95% coverage of all surfaces compared to the two Hurricane fogger method (57%) and the single Hurricane fogger and single Fogmaster fogger (40% and 24% respectively).

This study shows that creating a disinfectant fog within a decontamination room does a poor job in completely covering all surfaces of supplies with disinfectant. Considerations to increase the success of supply disinfection should include hand-application of disinfectant or updating supply entry procedures that allow supplies to be exposed to heating and a holding time before entered into the farm. 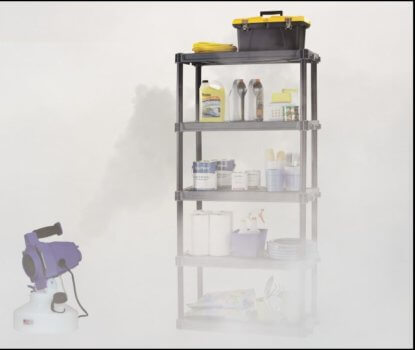 Manufacturing issues for many swine health products over the year has led to several backorders. An update on products that have recently become available again includes:

Work with your Swine Vet Center veterinarian to review treatment protocols and discuss where these antibiotics fit into your herd health management.