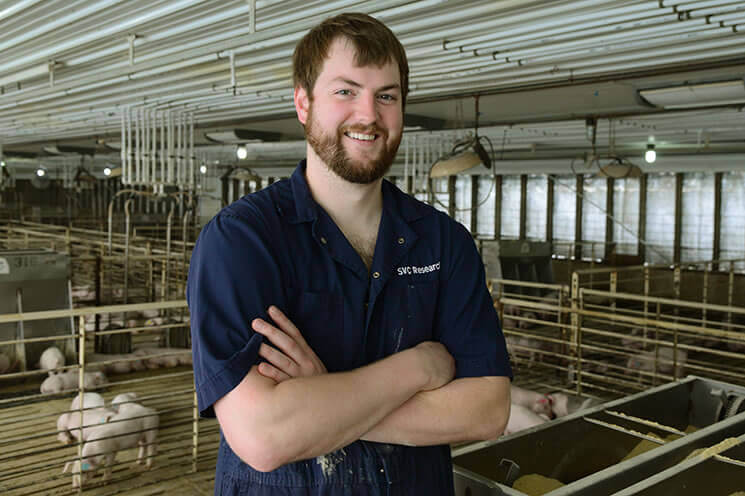 “We can be pretty demanding as far as what we ask from gilts, especially once they get ramped up in lactation,” reported Henry Johnson, DVM, Swine Vet Center, St. Peter, Minnesota.

“Because we want that gilt underline developed for subsequent farrows, gilts end up weaning a lot of pigs and putting out a lot of milk in their first time up in the farrowing house,” he explained.

As a result, some gilts use up their fat reserves during lactation and come back into the breeding barn thin. Many times, these will also be the sows coming into heat on day 6 or 7.

Instead of breeding these sows, Johnson suggests skipping a cycle to let them put on weight and become more productive sows in the herd.

“We see an advantage to skipping some of these sows we call late weaned,” Johnson said. “Most of the time these parity-1 (P1) sows performed well and weaned a lot of pigs. But they need extra time to recondition.”

When these sows are bred on day 6, 7 or 8, they become some of the herd’s worst performers on a total-born basis for the farm, according to Johnson.

“If we skip a late-wean sow to give her 21 days to cycle again and provide enough feed to allow her to put some condition back on, then she is ready for that next service,” he said. “We will see a more efficient animal in breeding and one that will provide a higher total born when it comes time to have that next litter.”

A farm can easily set up the criteria for staff to determine P1 sows that will benefit from a skipped cycle.

“If a sow comes back in heat at 6 days or later, most likely it will be a P1 and she will be very thin,” Johnson said. “It keeps it pretty simple for the farm staff.”

The number of P1 sows falling into this late-weaned and underconditioned category is typically about 5% of the breed group. This also represents a 5% drag on the breed group if those sows are bred first cycle.

“That’s part of the reason why it makes sense to give these P1 sows this extra time,” Johnson said. The extra cost for space and feed will be repaid with increased performance.

“You take the five worst-performing animals and put them in the five-best category and the entire group average shifts up dramatically,” he added.

“Then it quickly turns into a different story…I have all these pigs and how do I keep them alive.”