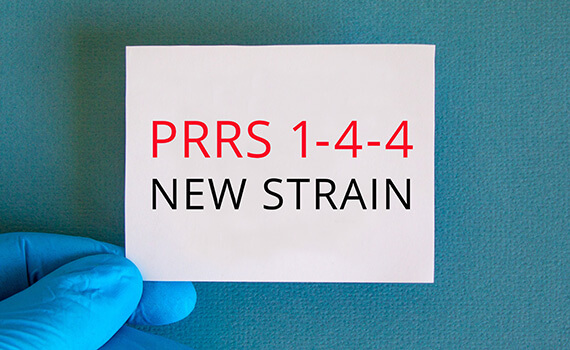 A variant of the porcine reproductive and respiratory syndrome (PRRS) virus is taking a heavy toll on hog farms in southern Minnesota and northern Iowa. The variant, identified as PRRS 1-4-4, hits sow farms especially hard, causing 10% to 20% sow mortality and high mortalities in the nursery of 50% and even as high as 80%. In grow-finish units, mortalities are less but still can be significant, and growth rates drop dramatically.

“From what we’ve seen on sow farms, this virus has a pretty distinct footprint,” Yeske explained. “You almost don’t have to wait for sequencing because you know what it looks like from the clinical signs.”

“One thing that’s unique to this virus is it tends to move quickly through the herds once you see clinical signs,” he added. “You’ll start with four to five animals off feed and then 200 the next day and 300 the next. It marches through the herd quickly.

“The abortions start about the same time the animals go off feed. We’ve seen upwards of 3 to 5 weeks of production aborted and 10% to 20% of the sows dying in 2 to 3 weeks.

“Also, there’s high piglet mortality in the farrowing house…50% up to 80%, which I didn’t think was possible.”

In addition, neither vaccination nor prior exposure to the virus appears to reduce the outbreaks, he added, but it’s difficult to tell with the limited number of herds experiencing an outbreak.

The PRRS 1-4-4 variant produces high levels of viremia, allowing it to spread easily in an area, Yeske explained. In addition, a milder winter with overcast, warm weather has helped the virus move around.

An increased number of diagnoses started in October 2020 in the two-state area, beginning with outbreaks in grow-finish sites and moving into sow farms.

“Certainly, the worst breaks have been, like we always see with PRRS, when you have viremic pigs leaving the sow farms,” he added. “But with this virus, we have lateral outbreaks even at the end of nursery with significant mortality.”

Yeske indicated some of the farms that broke were filtered, while others stayed negative even when located next to positive finishing sites and lots of positive pigs.

“Filters continue to show us they help but are not perfect,” he added. “The PRRS viral load is very high. There are lots of opportunities for this virus to get in, and if there’s a weakness, it’s likely going to find it.”

After a 2- to 4-week period where herds experience the devastating losses, farms start to stabilize.

“We see sows start to return to normal,” Yeske said. “We see normal pigs born again but with very low, live born due to mummies, even though total born are still in the 16 to 17 pigs range. There are a lot of mummies on these farms but not necessarily all farms.”

As the herds continue to stabilize, Yeske said they will track them on the PRRS timeline to see if it runs similar to other strains they have dealt with in the past.

The big lesson Yeske hopes producers will learn from these outbreaks is the importance of a biosecurity plan that is strictly followed. He urges everyone to review their biosecurity.

“Identify the greatest area of risk in your herd,” he explained. “Risk is how likely something is to come into the herd and then how many times a week do you do that activity. Multiply those two to give you the risk.

“Then improve any weakness in your biosecurity system, and do it sooner rather than later,” he added. “Don’t wait to identify it in your outbreak investigation.”