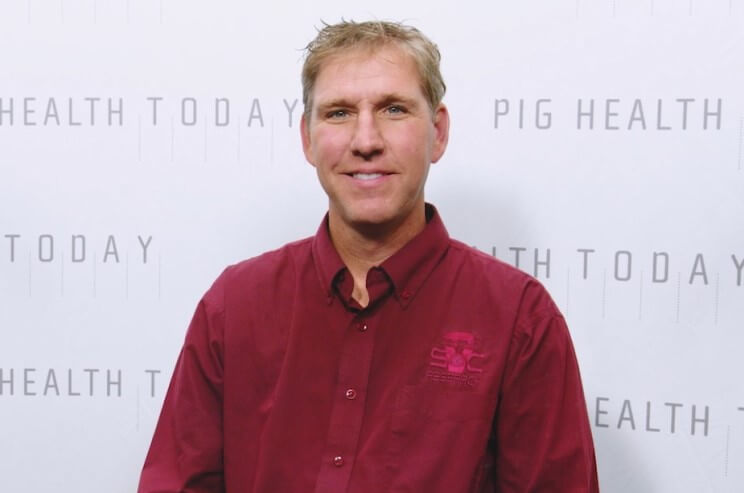 Baby pigs do well in farrowing, but when they are weaned onto solid feed in the nursery, some of the pigs do not make that transition. After 3 to 6 days in the nursery, about 5% to 7% of pigs become thin and end up in a sick pen, he explained.

Kiehne has been doing more diagnostics trying to determine what diseases may be involved and then coming up with a management plan to help nursery operations do better.

“The disease I keep coming up with is rotavirus,” he said. “I think what causes this is the change to the gut; then rotavirus sees an opportunity to cause some scour issues.

“It’s usually something that you can treat with just really good water,” he continued. “You can get them through it, but it doesn’t seem to be enough right now. The levels I’m finding in the guts are higher than I think we’ve had in the past.”

Kiehne is looking into different products that could be fed to young pigs to help with rotavirus. He’s working with nutritionists to make changes to feeding plans.

“We’ll try feed A versus feed B, and it might have more whey in it or less whey in it or more sugars, less sugars or whatever the nutritionists come up with,” he explained. “Then we’ll do a fecal scoring on them, and we’ve actually seen we can improve it with a change in nutrition.”

Another culprit with young pig scours is Escherichia coli, Kiehne said, which can be easier to treat since there are antibiotics that can help with the infections. “But we’re finding some E. coli that are resistant to almost every antibiotic that we have,” he added.

Kiehne summarized the infection cascade as a harder-starting pig entering the nursery, getting some rotavirus, and then opportunistic pathogens like E. coli jumping in and becoming a real nuisance. “It’s usually a little worse in the winter because you can chill pigs, and you have to shut down barns and that kind of thing,” he added. “So I’m a little worried this winter could be another battle.”

To combat these nursery scours, Kiehne recommended getting out into the barns and posting pigs to see what is involved disease-wise.

“Then work with your nutritionist because…moving from a sow to solid feed is probably the most stress those pigs will ever go under,” he said. “Making sure it’s the best transition for these pigs will be very helpful.”