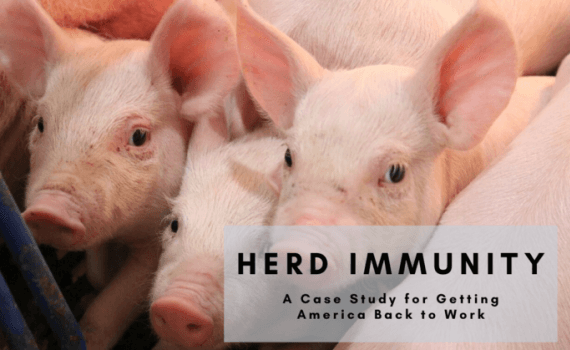 (Image by National Pork Board and the Pork Checkoff; created in Canva)

How does herd immunity in pigs apply to COVID-19? Some veterinarians say it has everything to do with this current pandemic situation.

“We’ve been working on herd immunity in the swine industry for decades,” says Tim Loula, DVM, of Swine Vet Center in St. Peter, Minn. “We use population medicine and do complex disease eradications on pig farms. About 20 years ago, the U.S. swine industry accomplished a national Pseudorabies virus eradication, a government program, to rid the U.S. of this disease. We have also worked with clients over the last 20 years to eradicate atrophic rhinitis, Actinobacillus pleuropneumoniae (APP) and swine dysentery. Today we perform eradications for porcine epidemic diarrhea (PEDv) and porcine reproductive and respiratory syndrome (PRRSv) and Mycoplasma.”

He says the key is understanding the disease status of each pig and population, and then working on a plan to get every pig “on the same page.”

After the first cases of COVID-19 were discovered at the Smithfield Foods pork processing plant in Sioux Falls, S.D., Loula and Dave Bomgaars of RC Family Farms reached out to the healthcare industry to visit with doctors about COVID-19. Doctors from Sanford Medical in South Dakota joined Loula, Bomgaars and a few other swine industry leaders in conference calls to formulate a plan using the best science available.

With their experience in population medicine, Loula hoped that if they all put their minds together, they could find some solutions or at least develop a plan to move forward. Together, the veterinarians and doctors shared flow charts of how they would interpret best testing procedures for plant workers.

“This situation is very serious. People are getting sick and some are dying,” Loula says. “We have to use all the science that we can and use the concept of population medicine to our advantage.”

How does population medicine work?

In their testing algorithm, the key is knowing every person’s status regarding the virus.

“We need to test every worker for the virus (PCR test) and for antibodies. This would allow us to group people into one of three buckets – positives, negatives (naïve) or immune (positive for antibodies),” Loula says. “Then, once you get that information back on your employees, you manage it like a pig farmer would.”

Managing people like pigs may be a difficult concept for people to accept at first, but Loula says producers manage different disease populations every day in their swine herds. He believes the process can work similarly in the human population.

The positive group indicates people who have the virus and are actively shedding it. People in that group would need to self-quarantine and be retested every seven days. Once their PCR tests come back negative, that indicates that their body has created antibodies and they could instantly move over into the immune group and get back out in the workforce.

The negative group is also referred to as “naïve” on a farm. These people have not contracted the virus and are the most vulnerable group. He says people in the negative group need to watch who they associate with, paying special attention to who they share rides with or hang out with when they aren’t at work.

Loula says he could even make a case for “negative” families in packing plant communities with COVID-19 outbreaks to move into a hotel or dormitory temporarily to protect themselves and to help keep these plants going.

The third group, the immune group, possess antibodies that provide immunity to the virus. This group can work with the negative group and not pose any threats, Loula says.

He adds that there is the possibility of someone having a positive PCR and a positive antibody test. This means they have a very low risk of shedding, but there is a possibility. He believes people who fall into this group could be segregated in a plant into a certain area of production or possibly work a different shift.

“We’ve got to figure out who has immunity and keep them working. They can keep these plants running,” he says. “The situation at hand with plant closures is dire. It’s a national emergency evolving right in front of our face.”

How can this help?

Knowledge is power. Loula believes helping not only the workers, but also communities, understand how herd immunity works will help alleviate unnecessary fear and hysteria.

“For example, in the Columbus Junction plant, workers may be concerned that two people died. That’s a legitimate fear. But if you could help people understand how you are separating the positives from the negative (naïve) and immune groups, then they can go to work without fear,” he says. “We need to tell a better story of the science involved.”

He says understanding the population of workers, in this example, would allow plants to make informed decisions about how to separate the positives from the negatives and immune.

But the key is that every worker needs to be tested. When only 700 workers out of 2,000 are tested, that only provides insight into a subset of the population and doesn’t reveal asymptomatic people who are actively shedding the virus. This also does not allow for a plan to be formulated or followed, he says.

One of the greatest challenges now is a shortage of tests. Loula says there’s no question that health workers need to be tested first, but he believes people helping produce food should be next.

“We’re in danger of having to waste tons of food if we don’t get this figured out,” Loula says. “We need to have a plan in place to get plant workers tested. We need to test entire populations with both PCR and antibody tests. It’s time to get a plan, work the plan and if it’s not quite what we want, keep reworking it.”

For example, Iowa State University’s Veterinary Diagnostic Laboratory is helping expand COVID-19 testing capacity to expedite test results at the State Hygienic Laboratory at the University of Iowa, the university reported in a release. Not only did they share extraction techniques, but they also shared instrumentation and the reagents needed for analysis.

As other industries return to production and non-essential workers begin getting together again, Loula believes another wave of the virus will spread. However, he believes the food industry could serve as a good model to help people know how to bring groups back together and not panic as the economy gets back up to speed again.

“We are the essential workers on the front line. We’re the ones experiencing this,” he says. “If we are successful in the food industry about how we work through it, then we could be the model for every other industry coming back.”