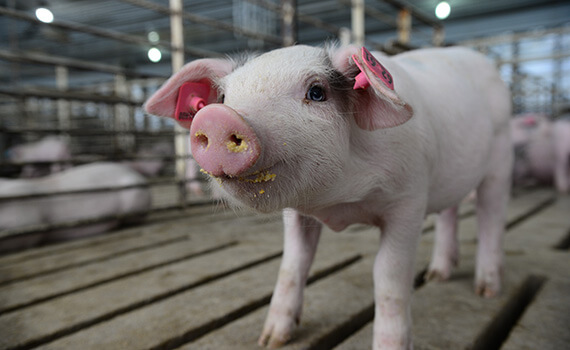 Porcine reproductive and respiratory syndrome (PRRS) continues to be a critical concern to the U.S. pork industry. The combined production losses associated with PRRS in breeding and growing-pig herds are estimated at more than $663 million, and that doesn’t include secondary infections.

There is usually a high degree of interaction between pathogens, and it has been shown in previous studies that a reduction in PRRS also causes a reduction in the impact of co-infections like Streptococcus suis, Haemophilus parasuis, Mycoplasma hyopneumoniae, Actinobacillus pleuropneumoniae and Salmonella spp.

PRRS is a viral disease, yet it is known to cause considerable inflammation in the respiratory system. In PRRS-infected gilts, endometrial inflammation and vasculitis increased progressively from 2 to 14 days post-inoculation.

Inflammation may be one of the factors associated with abortions in the presence of PRRS as well. Inflammation at the point of attachment of the uterus with the placenta may disrupt the fetus, resulting in loss of the fetus or the formation of the mummy, says Paul Yeske, DVM, with the Swine Vet Center in St. Peter, MN.

“There are certainly some things we don’t understand, and we have changed our thought processes on how we can manage these things,” Yeske says, adding that PRRS-infected pigs are more vulnerable to secondary bacterial infections requiring an antibiotic therapy, so having an antibiotic and an anti-inflammatory can be a good combination.

“The inflammatory response is a call to action of the whole pig,” says John Deen, DVM, PhD, professor at the University of Minnesota. “It affects behavior, reproduction, metabolism and even the pig’s ability to survive. It has to be taken seriously, especially in the face of a disease like PRRS. We need to provide extra care for animals to recognize when they cannot cope with the insults they have in front of them.”

Inflammation is usually associated with bacterial infections; in which case an antibiotic would be used to help reduce the inflammation that accompanies an infection. Now, researchers are learning more about the role of inflammation in viral infections like PRRS.

Andre Buret, PhD, a professor in the department of biological sciences at the University of Calgary, Canada, has done extensive research on the immunomodulation properties of an injectable antibiotic on pigs infected with PRRS. Immunomodulation refers to a change in the body’s immune system, caused by agents that activate or suppress its function.

While no vaccine against PRRS provides 100% protection, some injectable antibiotics have been shown to exhibit potent immune-modulating effects — that is, they activate, boost or restore normal immune function once it’s damaged. That in turn can help better withstand the inflammatory responses associated with PRRS.

“Treatment options to control PRRS outbreaks are limited, and the efficacy of vaccines is thwarted by the antigenic variability of PRRSV,” Buret says.

He explains that PRRS can create immune dysregulation — a breakdown of the immune system, in other words — that makes the host more susceptible to opportunistic pathogens. Disease severity is closely related to the ability of the virus to disrupt the functions of the macrophage — a large white blood cell that is an important part of the immune system — and induce inflammation, he adds. For those reasons, he theorizes that targeting inflammation with an antibiotic used for bacterial co-infections might be a critical element in managing the costly PRRS virus.

In laboratory experiments conducted by Buret and his team, using an injectable macrolide antibiotic did not change intracellular or extracellular viral titers, nor did it alter expression of the viral receptors (CD163 and CD169) on porcine macrophages. It did yield other benefits, however.

“In contrast, [the antibiotic] exhibited potent immunomodulating properties, which therefore occurred in the absence of any direct antiviral effects against PRRSV,” Buret says. “These data demonstrate that [the injectable antibiotic used in the study] inhibits PRRSV-induced inflammatory responses in porcine macrophages and protects against the phagocytic impairment caused by the virus.”

Buret’s work with pigs and PRRS marked an evolution in the battle against the PRRS virus.

“We spent two and a half years of research…and we were able to demonstrate [the antibiotic] may very well have benefits in the context of PRRS viral infections based on what we discovered,” he says. “It seems to disarm the ability of the virus to prevent host immunity to clean up bacteria in the lungs.”

If a producer has the background of a viral infection like PRRS on the farm, the engulfment of foreign particles by the macrophages is compromised. As a result, the lung cannot clean itself anymore and the pigs are more prone to secondary infections, Buret says.

“The virus alone triggers an inflammatory response and impairs phagocytic clearance by macrophages. We observed that this type of antibiotic protects against both effects. It’s really one discovery leading to the next,” he adds.

“As it turns out, our discoveries have established for the first time that controlling inflammation at the same time as you control the microbe is the best way to deal with these diseases clinically,” Buret says.

Swine Vet Center’s Yeske recalls working with a client who had a PRRS break in a herd that was being treated with an antibiotic as part of a Mycoplasma hyopneumoniae (M. hyo) elimination program.

“We were treating the herd with an antibiotic [for M. hyo] and [it] broke with PRRS in the middle of the M. hyo elimination,” Yeske says. “You never know if an outbreak is going to be as severe from herd to herd as other similar outbreaks, even if the virus is similar, but we saw much less of an impact in this particular case as we went through and treated the animals for the M. hyo elimination. We had fewer clinical signs than we would have expected to see, based on other very similar farms that had essentially the same virus. It does make us think about some of the mechanisms that may be going on [associated with inflammation].”

Because PRRS is often a co-infection with bacterial infections that also cause inflammation, antibiotic treatments for M. hyo might yield secondary benefits that make the effects of PRRS less severe.

This is a new approach for veterinarians to consider when PRRS is present in herds infected with swine respiratory disease, Buret says. The antibiotic controlled the bacterial infection, which in turn helped to not only reduce inflammation but also the host’s response to it — a process that, if left unchecked, ultimately causes pulmonary failure and death.

“Research in live pigs is warranted to assess the potential clinical benefits of this antibiotic in the context of virally induced inflammation and tissue injury,” Buret says.