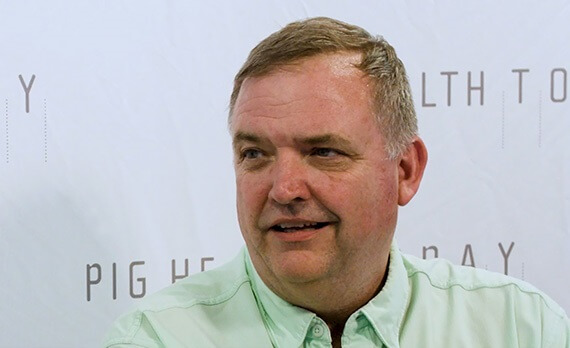 Taking time to walk the pens, make eye contact with each pig and pull the sick ones for individual care seems to conflict with the basic tenets and efficiencies of population medicine.

“It is a big task, but we feel it’s a very important part of doing what’s right for the pig,” said Paul Yeske, DVM, Swine Vet Center, St. Peter, Minnesota.

“Individual pig care [means] to make sure we look at every pig every day — and that we evaluate them essentially from tail to snout — to try to identify any potential problems that pig may have as quickly as possible,” he told Pig Health Today.

Yeske says the approach involves three basic steps: Identifying the at-risk pig, being specific about its symptoms and effectively communicating the situation to others in the operation.

Practically speaking, he adds, that process begins with spotting the outlier — the pig that simply strikes you as somehow unusual.

“I encourage caretakers as they walk through the barn to develop a pattern as they go through each pen, to make sure they get an opportunity to look at every pig,” he said. “Basically, you’re looking for any of the clinical signs that the pig isn’t normal.”

Next, individual treatment protocols with an injectable antibiotic — typically already in place and specific for each farm and for each flow and system — can be called into use right away and used under veterinary supervision.

“Early intervention is really the key as we talk about individual pig care,” Yeske said. “We know that if we treat a pig later in the course of the disease, we have poorer response to treatment. If we can treat the pig earlier, we can have a better response.”

Research has proven that, particularly on farms with low health status, training caretakers to identify and treat sick pigs at an early stage of disease can improve growth and productivity during the all-important nursery and growing periods.1

“It does take time,” Yeske conceded, “but the payoff is very high. We get the pig back into production faster. The quicker we can identify that pig, the quicker we can get that pig treated and the better the response. The payback for the producer is very high because we get that early intervention ….  And we know it’s the right thing to do for the pig.”